What does a Film and Video Editor do?

The job duties of film and video editors are numerous. An employee might find himself studying scripts to understand the storyline and collaborating with directors, producers, and film staff regarding the script and director’s goals. Throughout the filming, the film editor will examine tapes for editing purposes, looking for errors, segments that run long or parts that do not match the story or go with the storyline. He will work with others adding sounds, voices and music that match the script and place them in the appropriate place.

Film and video editors complete these tasks with digital equipment and computer software to create high-quality sound effects. Varying camera angles and shots will be looked at and the best ones added to the reels. The reels will be reviewed several times before the editor comes up with a final version called the director’s cut. During the process, he works with other staff including sound and lighting technicians, costume designers and makeup artists, actors, directors and other editors. Making a movie is truly a team effort. 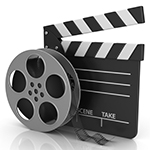